With the pre-established vision of Delta Epsilon Psi’s 18 Founding Fathers, for years, a group of men saw a dream and vision to radiate the same traditions, principles, ideals and beliefs at Binghamton University’s campus, a campus where Greek Life had a prominent impact for many years and in some cases theorigin of many other organizations, including the origin of South Asian Greek Life in the nation.

The Founding Class of Alpha Eta Colony is composed of 11 diverse Founding Fathers of various backgrounds, cultures, religions, and majors/career paths. The ambition to bring Delta Epsilon Psi had been aspired and over several years, this aspiration evolved into a vision and mission by several individuals. In the Fall of 2011, the dream to bring Delta Epsilon Psi to Binghamton University was made possible by eleven young men. These eleven driven men of different history, and cultural backgrounds were united by a common vision. Their desire was to establish a unified voice in the Southern Tier of the state of New York that excelled in leadership, scholarship, and philanthropy. These eleven  founding fathers envisioned a fraternity that rested on the pillars of brotherhood, discipline, and commitment. Driven by their desire for service, these men wanted to bring a voice to the community. These men faced many hardships, but their strong will, determination, and work ethic prevailed. These men persevered through every obstacle that was thrown their way as they believed that Delta Epsilon Psi could grow and flourish at Binghamton University.

These eleven driven men united to found and establish the Alpha Eta Colony of Delta Epsilon Psi on the campus of Binghamton University. Their desires to bring a voice to the campus and community that excelled in leadership, scholarship, and philanthropy had been established. Although these men faced many obstacles, their strong work ethic and commitment never wavered and On April 15th, 2012, the initial interest group was formed on the Binghamton University campus. 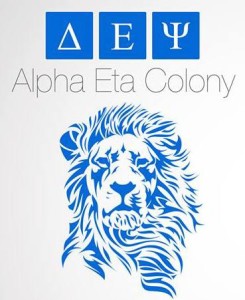